This is Day 18 of 21 Days of Hope + Help for Your Money, a series providing you encouragement and tips to start the year off on a note of hope. Catch up on previous posts here. For future posts, come back daily or subscribe to have them emailed directly to you.

“Nothing can be done except little by little.” — Charles Baudelaire

If you discovered that you overspend by $1000 every month and were challenged to close the gap, would you throw your hands in the air and declare there’s no WAY?

That response would be understandable. I mean a thousand dollars is a lot of money to be short, and unless you blatantly and frivolously overspent $1000 every single month, it would be hard to see how you could overcome that deficit.

I was once in that position — times two. At my rock-bottom point in my finances, my family and I were $2000 in the hole every month— $2000. When I discovered that, I was floored. And disgusted. And frustrated. How would I overcome that? How could we reduce our expenses by $2000 a month?

Long story short, we did it.

If you discovered yesterday, that your percentages are out of whack, don’t throw your hands in the air and declare defeat. Use the “a little here, a little there” approach to get your expenses in line with your income.

If you completed the action steps on Day 16 and Day 17, then you’ve created a full budget for the coming month, and you’ve calculated the percentages for your categories.

Write down a list of all the possible ways you can spend less and take action on the ones that will make the most impact on your budget. 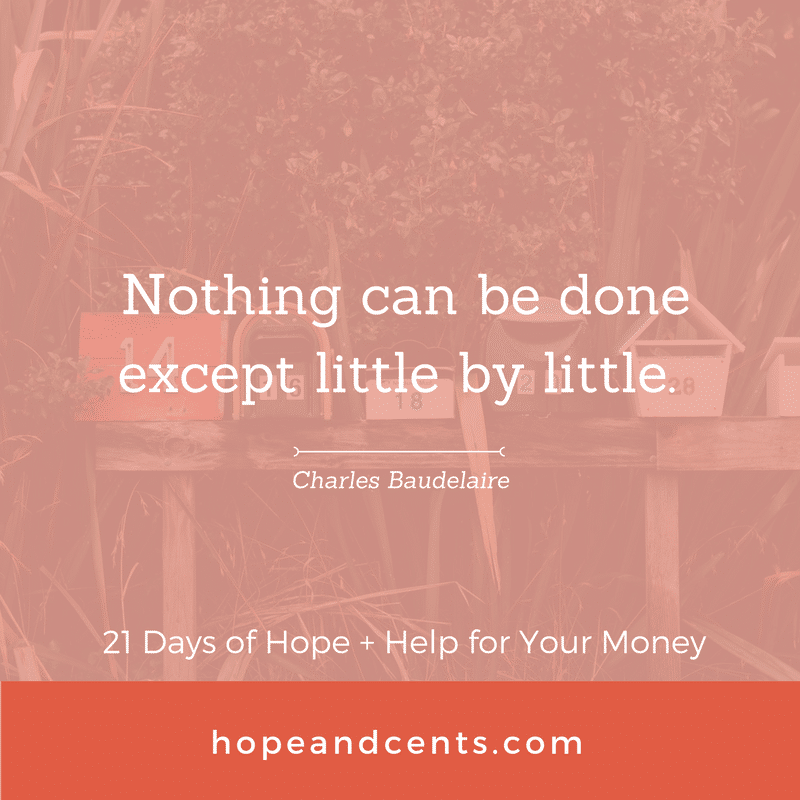 Using the “a little here, a little there” approach, what are some things you can do to trim your spending?