So, You Think You’re Frugal, Huh?

So, You Think You’re Frugal, Huh?

Recently, I was speaking with someone, and the topic of frugal living came up. During the conversation I was asked, “What kind of frugal are you? Are you ‘make-your-own-soap’ frugal?”

While I have forayed into making my own cleaning solution and shampoo (for those of you who know I have no hair, it was for my kids), I did so more to be in control of the ingredients in those products and less to save money. Plus, I don’t consistently make them, so I wouldn’t say I’m “make-my-own-soap” frugal.

After that conversation, though, I found myself questioning the extent of my frugality. I began to wonder, “Am I frugal? I don’t make my own soap…maybe I’m not as frugal as I thought.” This made me think about the fact that there are varying levels of frugality.

Being frugal often gets a bad rap. It is sometimes equated with being cheap or stingy or is often associated with lack or deprivation. On the contrary, frugal is defined as economical in use; prudently saving or sparing; not wasteful. Being frugal is being wise with your resources—whether it’s money, time, or anything else.

Choosing to be frugal monetarily is an excellent vehicle to help you meet your financial goals. Frugality helped me get out of debt, and it is helping many others do the same, reach financial independence, and achieve other milestones.

There is no one way to walk out being frugal. Since paying off my debt, I continue to live frugally to help me live within my means. The methods I choose to do that include couponing, finding less expensive alternatives, using cash, getting the most use out of items, delaying a purchase if necessary, or even spending more on something because of its value and longevity. I’m more of a print-on-both-sides-of-the-paper, check-it-out-from-the-library-instead-of-buying-it, wait-let-me-find-a-coupon-for-that frugal.

Your level of frugal may be different from mine and it may be different from those who make their own soap…and that’s okay. If you’re dipping your toe in the frugal pool for the first time, your “frugal” might be more along the lines of I-brown-bagged-it-for-a-week-straight, or I’m-going-to-give-the-store-brand-a-try. Any version of frugal is good!

Your Frugality May Shift And Evolve

When I first started watching my spending, my “frugal” was borderline cheap. Actually, it was just plain cheap. I had a goal of not spending more than I needed to—on anything, and I made that change a bit abruptly.

I cringe when I think back to the first few days of my debt-free journey, when a few co-workers of mine were making a “coffee and treats” run, a normal occurrence for us. They were making the rounds of “who wants what” and collecting money. When it came to me, I responded, “Oh, $2 for a brownie? That’s sooo expensive.” I got blank stares from my co-workers, because of course, just a week ago, or maybe even days ago, I shelled out $2 for that brownie, no problem. It didn’t make sense to them that suddenly, it was too expensive.

They were right to be confused. While my goal to be frugal and spend less money had merit, and eventually, is what got me out of debt, I went from spendthrift to cheapskate overnight. And being cheap and being frugal are two different things.

During the two years of paying off debt, and since then, my manifestation of frugal has evolved. I’ve learned to live out my frugality in the genuine sense of the word—being wise and sparing, not wasteful—and am continuing to learn and try new methods of doing just that.

Being frugal is a way of way life—a constant goal—so how you choose to be frugal may change over time.

Explore the Kind of Frugal That Works For You

If I compare myself to others, (especially those who make their own soap), their frugal ways could put mine to shame, and to others, my ways may seem extreme or cheap. I remember a few years ago, a friend of mine and I both had teenagers who were preparing for the SATs. We both got the same giant test prep book except my friend bought hers at a bookstore, and I borrowed mine from the library.

You may compare yourself to others, and dismiss your type of frugality — don’t. What is one person’s frugal may be another person’s extravagance or yet another person’s cheapness. It’s okay to explore and do what works for you.

It’s great to look to others who do frugal and do it well, for inspiration and tips. But don’t feel shameful that you are not doing it their way. Do frugal your way.

Related Reading
•   Are You Frugal or Cheap?
•   8 Tricks to Help You Save More Money

Again, being frugal has many different levels and can be carried out in a variety of ways. What’s important is that you own your particular version of frugality and live it out with confidence.

I may not be a make-my-own-soap frugal now, but maybe that’s the next stop in my frugal journey. Embrace your method of being frugal. And if it changes over time, embrace that too.

Do you consider yourself frugal? How would you label your type of frugality? 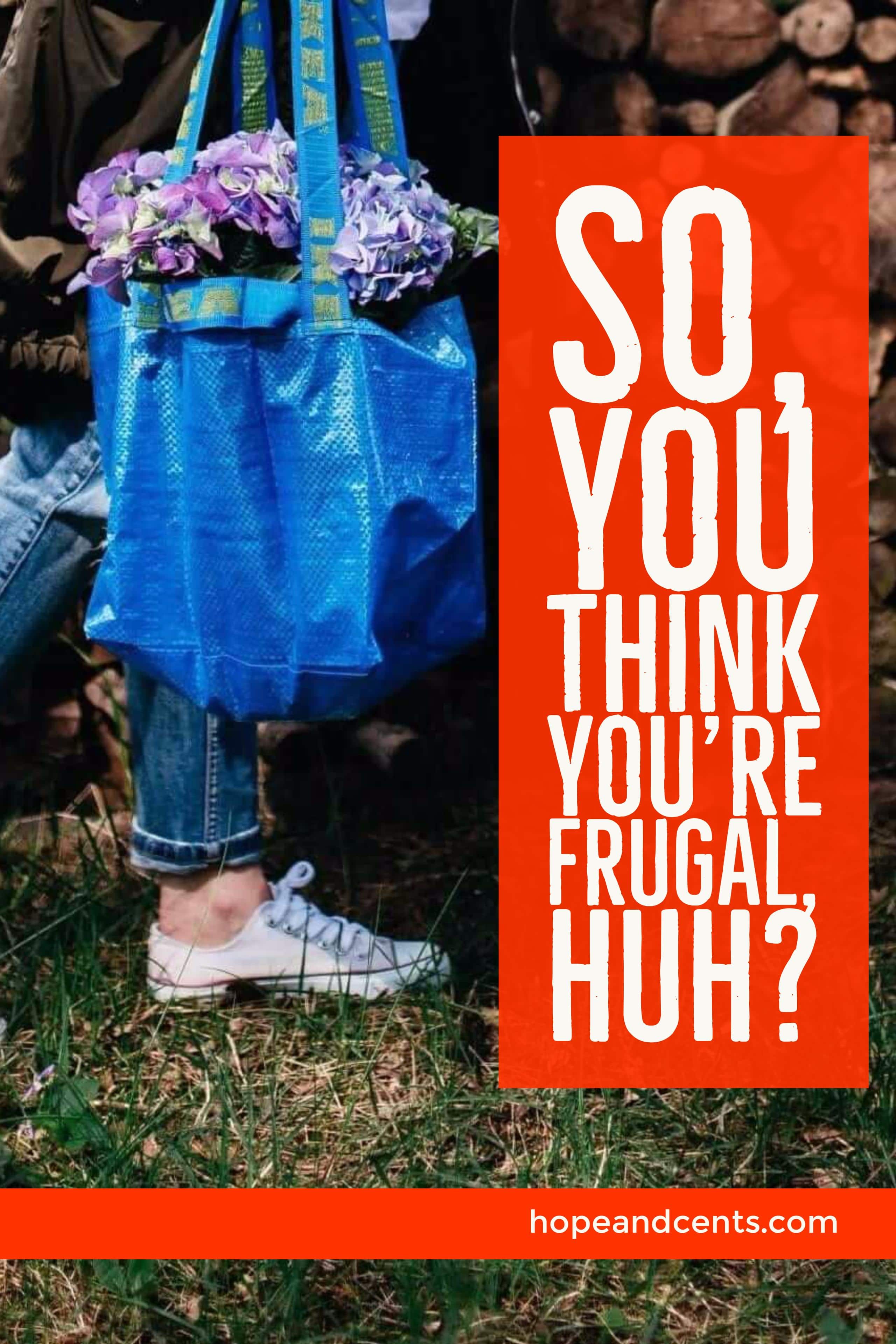